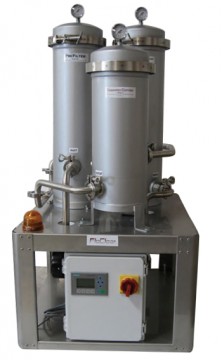 The FloClear® HS Series was designed to bridge the gap between the 6-color 29” press up to a 6-color 40” press. It utilizes the same 3 completely unique and different stages of filtration media but has a smaller surface area in the second stage. Therefore, because of the lesser surface area, it is only intended to be used and function for the aforementioned applications only. The HS Series comes in 2 models. Similar to the FS Series in a full cabinet that is matched to the OEM specifications of height and depth, the HS-F Series has a Smart Model, a Productivity Model, and an Integrated Model (licensed to AGT-USA).

The HS-F Smart Model comes with an integrated CPU and touch screen module that is integrated with the multiple transducers located at each of the various housings and the pump. This enables the unit to advise the operator the pressure at each particular stage as well as the pressure differentials between each stage in order to facilitate determination of when and which particular stage of cartridge needs to be changed. The LCD touch screen also monitors usage time of each filter stage, gives troubleshooting suggestions if a warning appears on the screen, monitors and alerts if pressure increases too rapidly over a certain time period, and automatically shuts down for high or low pressure problems and alerts user of what occurred and last the pressure readings before shut down.

The HS-F Productivity Model has the same 3 stainless steel housings and seamless stainless steel tubing, all of which is insulated to insure there is no condensation. The Productivity Model has and LCD Display to give feedback to the operator regarding various faults (if and when they occur) as well as record run times of the various filter media in each housing; the three gauges atop each housing to monitor pressures, a high/low pump protection is built into the unit so that the pump will shut down if either extreme is breached and indicate the fault on the LCD Display as well as light the beacon to alert the operator of the fault.

The HS-F Integrated Model is similarly equipped to the HS-F Smart Model with all of the functions and capabilities. However, we have licensed AGT-USA to completely integrate the system into its Combination system such that the unit is installed at the factory, integrated into the operation of the AGT unit, and utilizes the same CPU and touch screen, thereby saving the customer additional installation and material costs while offering the same optimum performance at almost the same price as the HS-F Productivity Model price.

The HS Series also comes in the HS-Compact Model which is has the housings on a Stainless Steel pedestal base giving it a much smaller footprint. The HS Compact comes with a LCD display featuring pump protection, as well as monitoring the run time of the various filters.