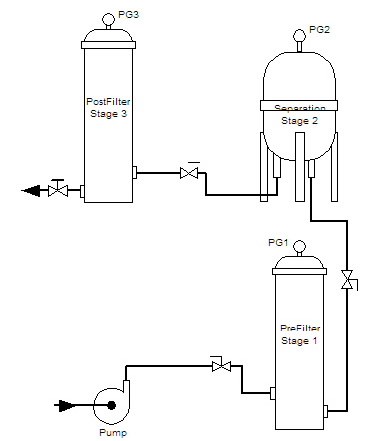 Understanding the pressure gauge readings and the relationship between the filters is essential to knowing when to change the filters, and will contribute to optimizing cartridge life.

In interpreting the meaning of the pressure gauge readings it is most important to realize that each pressure gauge indicates the total pressure of all stages downstream of the location of the gauge. Specifically:

A label on the side of the separation housing tells the operator to change the Separation cartridge when PG2 reads 50-55 psi.

Think of the pressure readings as an indication of “work” that the pump is required to do as it moves fluid through the system. Resistance to the pump’s effort to move the fluid is indicated on the gauge as “pressure.” As the filters do their job and remove contaminants fro the fluid the resistance to flow increases and the pressure on the gauge rises. It requires more “work” to push the water through a dirty Prefilter, so the gauge reading will increase. Since the pump is limited to a certain amount of “work,” the available “work” left after a loaded Prefilter is reduced (Scenario #3 example) and the pressure gauge reading on gauges 2 and 3 (after the prefilter) will be lower. It requires less “work” to push the water through a clean Prefilter so there is more available “work” to push through the remaining stages. This is why it is not uncommon for the pressure readings on stages 2 and 3 to go up after changing the Prefilter.

NOTE: If the Prefilter is not changed regularly, the high flow rate from the pump will eventually push the contaminant through the Prefilters. The Separation cartridge is then going to load with the larger contaminant very quickly, reducing its life substantially.

“Prefilter Pressure does not go down after changing the Prefilters.”

PG1 reads 35 psi, PG2 reads 35 psi and PG3 reads 14 psi. This is a common scenario and if the Prefilter has not been changed recently it probably indicates that it is time for a Prefilter change. However, after the Prefilter change, the PG1 pressure still reads close to 35 psi. This is caused by the fact that Stage 2 is still providing 35 psi of back-pressure causing PG1 to still read 35 psi. As the new Prefilters load the pressure reading at PG2 will typically start to drop or will stay close to 35 psi.

“How do I know when to change the Prefilters when the pressure is 35 psi right after a filter change?”

“All pressures are high, do all filters need changing?”

PG1 reads 40 psi, PG2 reads 40 psi and PG3 reads 40 psi. IMPORTANT: This does NOT indicate that all stages need to be changed. In fact, it probably means that only the Post-Filter needs changing. Remember PG1 will sense the backpressure from everything downstream of it. Start with changing the Stage 3 cartridges only and all the pressures will typically drop. Then take another reading and pressures will be completely different.

Post-Filter Cartridges that plug usually indicates heavy solvent or plate cleaner contamination. Plate cleaners that contain meta-silicates when mixed with an acid fountain solution will form a gel that forms between Stage 2 and 3 that will quickly plug the Post-Filters. The Post-Filter Cartridge micron rating is at least 100 times more open than the Separation Cartridge since it uses adsorption and chemical reactions as its reduction method.

“Pressure readings go up on PG2 and PG3 after the Prefilter change.”